I blogged before about my WIPs rising up against me to thwart my crafting prowess. If you think I’m being over-the-top and melodramatic you might be right but it was fairly disconcerting to fall foul of no less than seven projects at once.

Now there’s been some time to lick and heal wounds I thought I should do a round-up of how (or… if) I beat back the tide:

I’ve been plodding slowly along with Turbine diligently ignoring the glaring fact that if you knit an Aran-weight pattern in a DK-weight yarn it’s going to be too small. I really astonish myself, at times, for my dedication to the ethos of the ostrich.
After slogging it out for another few hours at knit-night and appearing to be no nearer to the crown decreases, I tried it on DH when I got home and he confirmed: it’s too damn small.

After five days of delusion I was in need of speed. It wasn’t just that I needed a project that would be done quickly. I needed to go from yarn to FO in less time than it usually takes me to mess things up.

I’d had “Leaving On The Edge” in mind when I did my recent stash-accumulation excursion. Once bitten, twice shy, as they say: I realised the Sirdar Chunky would not be the Super Bulky that the pattern calls for.

Luckily, I remembered I have two balls of Rowan Big Wool in my stash and a quick check of the pattern’s projects page convinced me others have had success with this yarn before.

I cast on in the car on the way to work (DH was driving, I hasten to add) and by the end of coffee break I had finished the first (of five) pattern repeats:

By the time I was finished my lunch I was 2/5ths there!

The rest was done that evening while watching an engrossing film, which actually slowed me down a lot!
Hey Presto:

As the designer herself tweeted:

– Posted using BlogPress from my iPhone

I have very little to report for this month. In fact, checking back on my post for my January Round-up, the situation has hardly changed at all!

GlenvArgh! is languishing while I focus on pattern-writing and knitting my design.
While I don’t have an FO to show for it, pattern-writing has been a fascinating & thoroughly rewarding process. Having read a few timely tweets from other designers, I was prompted to work out the Maths first. I did this as far as I could visualise but then *had* to pick up the needles to test it out. It was just as well I did because I had made some classic, newbie mistakes.

It took at least 3 attempts at the sleeve & shoulder shaping before I got it “right”. I also suffered two needle fatalities: one Denise cable and on of my Knit-pro cables.

Meanwhile, I did get a pair of socks into circulation, by darning a hole on one toe. These are my favourite socks, ever! They’re Embossed Leaves from Favorite Socks by InterWeave Press.

There was stash enhancement but it was of the controlled, long-awaited variety; and therefore completely acceptable. It was the first instalment of Janel Laidman’s “Illuminations” sock-club: two skeins of Staccato Sock by ShibuiKnits.

I also didn’t complete my February skein for the SkAM-SpAL. I was reviving a spindle of Louet Northern Top that I had started last Summer. Though I enjoyed the spindling – and became quite good at it after practicing so frequently – it really is much slower.

I had to bow-out of the February Spin-in because I was enjoying a weekend away in Inchydoney Hotel and Spa. It was a treat for my fortieth birthday.

– Posted using BlogPress from my iPhone

So, as mentioned previously, a few knitters/knotters/knutters had a bit of a night-out. As is our wont, hand-knits were worn.
And admired…
and photographed (apologies for the poor quality photographs that follow – trust me, they don’t do justice at all to the knit-wear!):
First up, a pair of Clapotis (Clapotii?): @DianeKnits models hers, made with Silk Blend by Manos del Uruguay (Thanks for the reminder, SheKnitUpThat); while @SheKnitUpThat (a.k.a. KneeHigh) models @SineadR’s, done in Wollmeise:

Below, BionicLaura (left) was showing off her Giant Cowl made from Sirdar Bigga; and TeaAndCakes (right) wears her O.W.L.S. jumper in Cocoon by Rowan.

@WrapNTurn wore her test-knits of @StolenStitches designs: the shawl (left) is “Centrique” done in Scrumptious by Fyberspates; and underneath (right) “Tallamh”, in Blue Moon Fiber Arts Sport-weight. 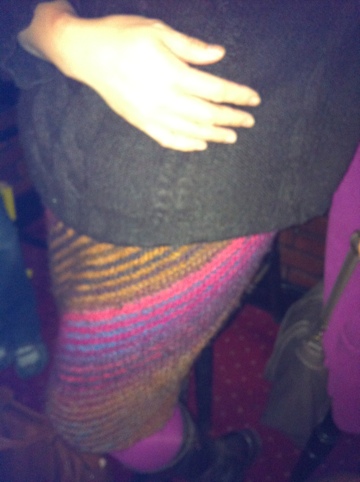 Towards the end of 2009 someone proposed the concept of “Ten for ’10″ listing ten things to achieve in 2010. My list was the bones of my knitting/crochet plan for the year.

So, my final score is 7 Done and 3 to Do! Those three I’m carrying forward to become the bones of my crafting plan for 2011:

In fact, these three are linked since it’s the design for DD’s cardigan that I hope to write up as a pattern and the intended yarn has been in my stash for 18 months already.

To help me put meat on the bones of my crafting plan for the coming year, I’m using this motto (or “rallying cry”) from FLYLady:

With out further ado, here are the Seven things I intend to target in 2011:

1. Present a pattern for publishing – I’ve wanted to send a pattern to Knitty ever since I first saw it. I have three different ideas, one of them being this cardigan pattern for my daughter; the other is the hat I failed knuckle-down to the design of during Ravelympics last February. Even if I don’t get published publicly I want to put myself through the process of writing up a pattern and submitting it. It will give me something to put up on the “Free Patterns” page of my blog at the very least (don’t look now, there’s little or no point!).

2. Bust my stash – recently I realised could list my Ravelry stash in order of yardage. This year I’m prioritising projects based on using big-yardage stashes first. So coats, dresses and lace shawls are going to be the order of the year.

3. No more USA – my stash-busting efforts will be undermined if I continue to have splurges like I did last year. So this year I’ve deliberately signed up to two “Yarn Clubs” which will send me a skein of sock yarn at regular intervals through the year. My theory is that the knowledge that yarn is on its way to me will stop me from impulse buying when yarn-fumes over-whelm me. Excluded from this are a) skeins purchased to complete a project and b) a skein or two bought as a souvenir on holidays

4. Spin more – We’ve set up a skein-a-month Spin-along over on the Irish Spinners Group on Ravelry. I’m trying to be disciplined about spinning for at least 10 minutes every evening. I’ve been advised by a spinner more talented and experienced than me that I’ll learn more from this than I would from an hour-long spinning session. Having struggled to connect my fibre the other evening after a 6-week-hiatus, I’ve learned this lesson the hardway. WIPdown proved to me I respond well to peer-pressure and the power of a band-wagon; so the SkAM-SpAL should be the incentive I need to stick at it. For now, I’m telling myself that this also comes under the umbrella of “Stash-busting”. When I have 12 new skeins of yarn waving at me from my stash drawers, I’m sure I’ll think differently!

5. Quilting – I may yet rue the day I ever clapped eyes on the Tokyo Subway Map Quilt but what can you do with love-at-first-sight, even when it is unrequited. I now have two full drawers given over to the materials I purchased at the Dublin Knitting and Stitching Show for making it; so this also comes under stash-busting. By taking baby-steps each month, I plan to have the quilt finished by the end of the year.

6. Gifts – This is partly under the stash-busting umbrella and partly under the design/publish umbrella. This also has a little to do with an economy drive. I have an idea of a gift I could hand-make for each of the female members of my immediate (mother & sister) and extended family (Mother- and Sisters-in-law). The first Sister-in-Law’s birthday crops up in early February, so I’d better get cracking with this kinda soon, eh?

7. Darn Socks – This is another “economy-drive” driven element of my plan. I have put several socks belonging to DH and me out of circulation (i.e. I’ve hidden them!) in order to darn them. The trouble is… I haven’t got around to the actual darning. There’s a bit of a viscious spiral at work here in that the less socks in circulation, the more wear on the socks in circulation, the sooner they get worn out and put out of circulation. So Phoo-ey to viscious spirals! One pair of socks is to be darned each month this year.